Modern engines can contain variable camshaft timing. This allows the torque to be increased in certain speeds.

The control is by oil pressure which is controlled by a solenoid valve.

The solenoid valve has 2 connections. 12 volts come from the fuse box. The ECU switches to ground on the apropiate port. 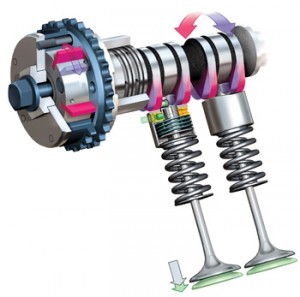