The rising horse appeals to the imagination. Unfortunately I notice that a number of these horses are quite crippled.

This also applies to this Ferrari 308. 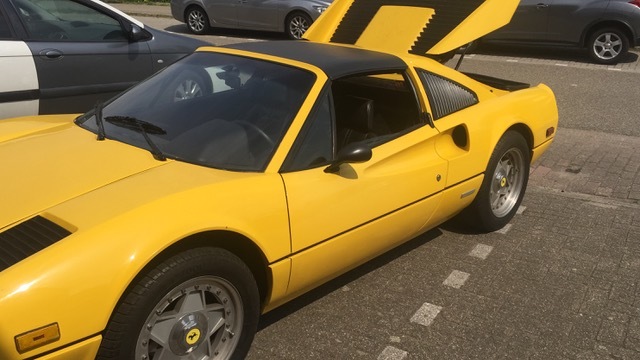 That's how a Ferrari 308 came in with ignition problems. The "specialist" had been working on it and replaced the original Magneti Marelli DigiPlex ignition modules with 2 "programmable" capacitive ignition units from MSD. 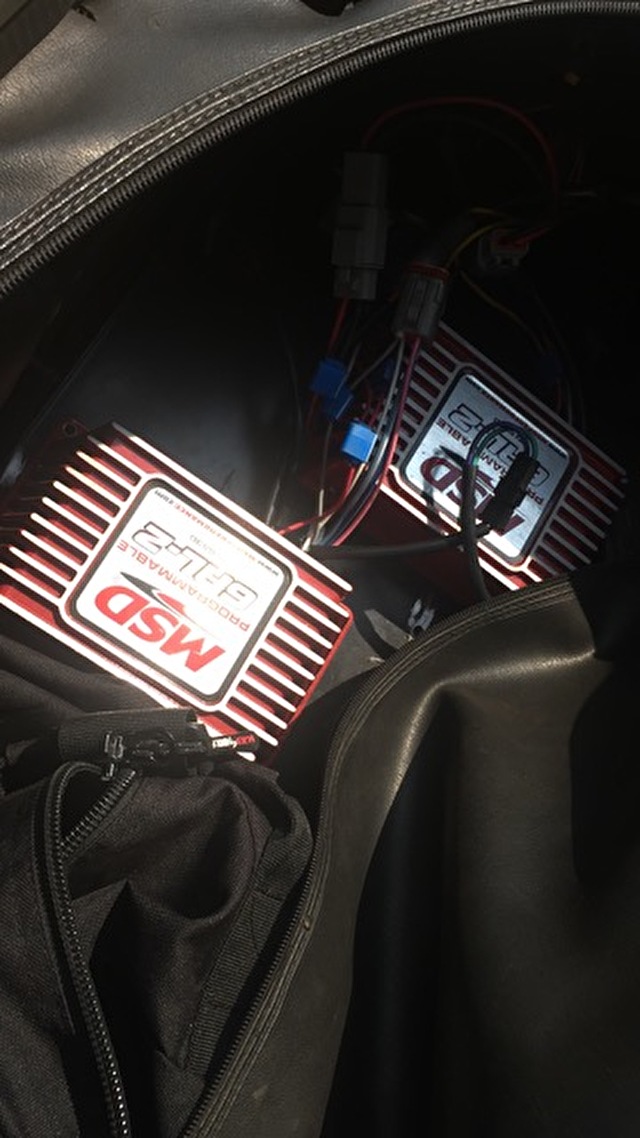 Not hindered by any knowledge, it appears. Because the car ran on far too much pre-ignition with detonation as a result. These units are not made for this at all because the trigger points on the flywheel are not adjustable. The amount of "retard" or leaving the inflammation was far too little. These MSD units were not developed for this purpose at all. A bad choice. 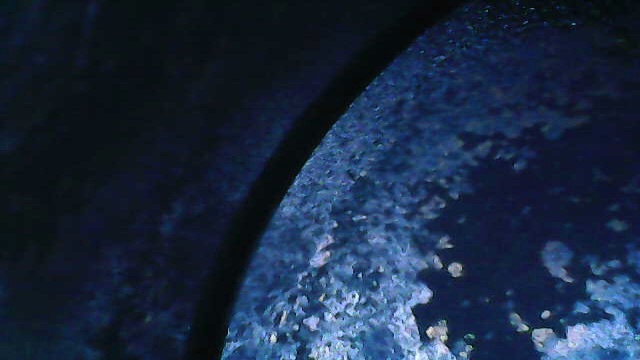 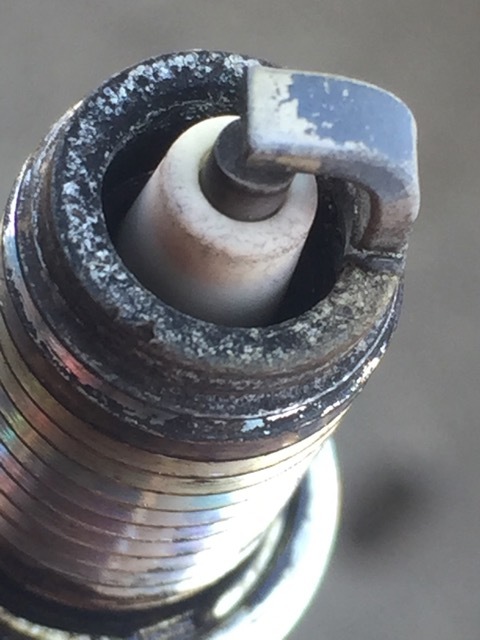 The car was no longer usable and the wiring had already been cut to such an extent that it was no longer possible to replace the ignition units. Moreover, these are fairly sensitive so the owner wanted a better solution. 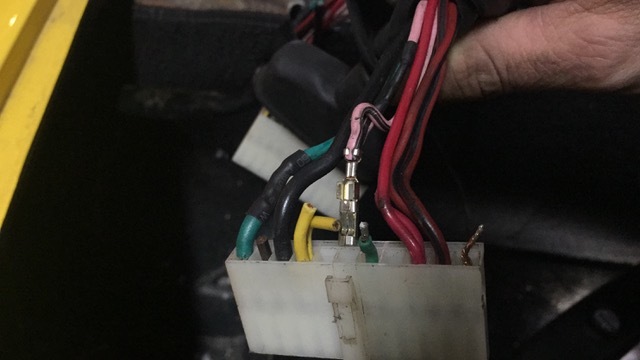 The ignition system of the Ferrari 308 falls under the "Dual Dizzy" category. A double distributor so, which comes across more Italian V8 and V12 engines (but also, for example, the V8 and V12 from Mercedes and BMW). The single EFIgnition is perfectly capable of replacing these 2 Magneti Marelli ignition modules. She does need a "trigger wheel". We modified the pulley a bit and shrunk a 36-1 trigger wheel around it. That will not come loose. Welding on cast steel is not really the solution and there is no room for a bolt. 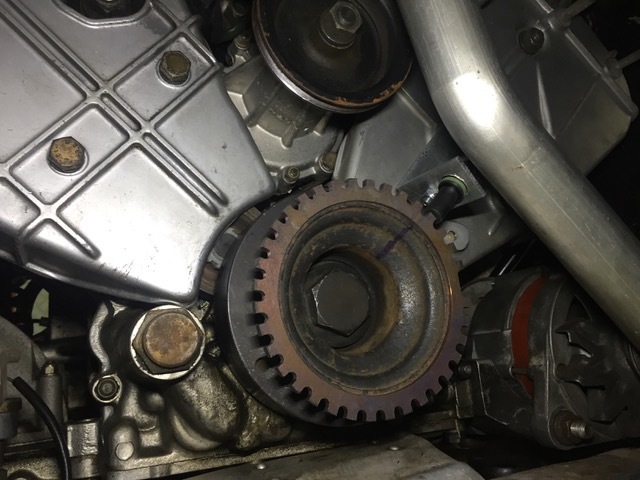 I played with the thoughts of equipping the engine with penbobines instead of using the distributors. The plan unfortunately received no approval from the owner. 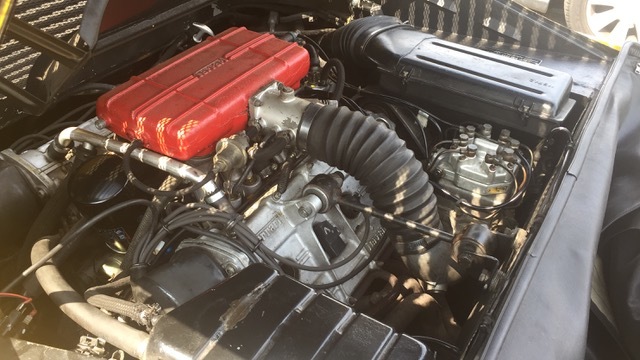 The EFIgnition was built in fairly smoothly. The engine starts, starts. Ignition timing is checked and set on time according to the factory data. Ready. You would say. Not quite. Here and there it turned out that modifications had been made over time. Some consisted of simply omitting hoses and components from the mechanical K-jetronic injection system. The engine was therefore stationary, but the adjustment was manipulated so that it almost drowned as soon as the engine was loaded. This is to catch the false air at stationary operation. 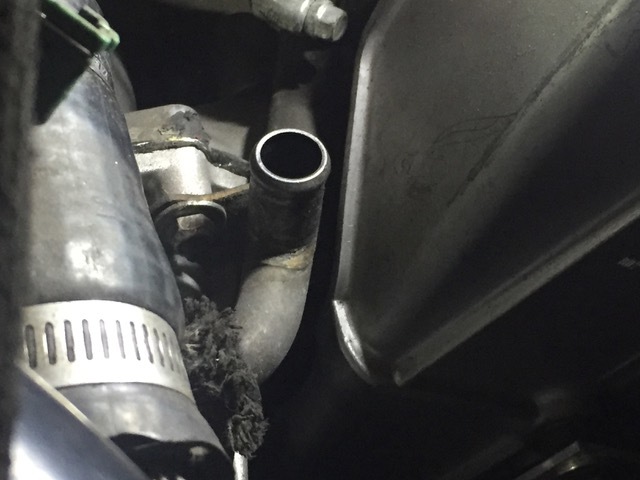 After the entire system has been checked and all pipes have been renewed and holes capped, the engine finally runs properly again. It could still be better if the K-jettronic system were removed and the fuel injection was taken over by the EFIgnition. It is unfortunate that the owners of these vehicles almost always go for "originality" and not for an engine that runs as optimally as possible, which would fit more in the spirit of the brand. But ... This Ferrari can hit the road again. 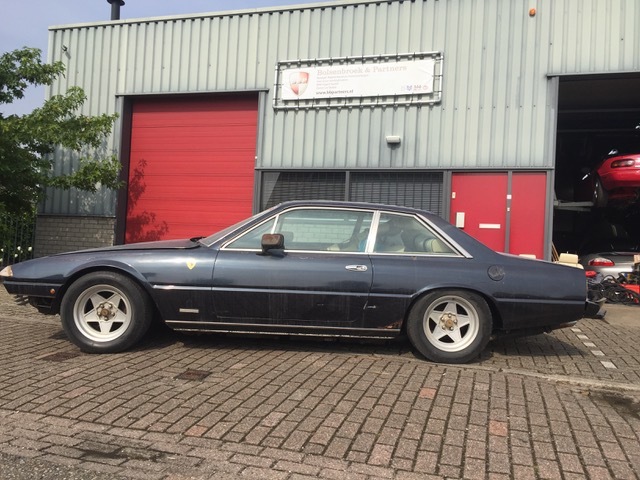 The first is brought in in a terrible state. She should serve as a donor for a Ferrari 365 replica. She spent a year with a Porsche specialist who "started the engine". We receive a video from that event and it makes us quiet. A V12 is not supposed to sound like that. The question for me is whether the motor is "worth" to transplant. Investigation started. And with the very first part it is "bingo". 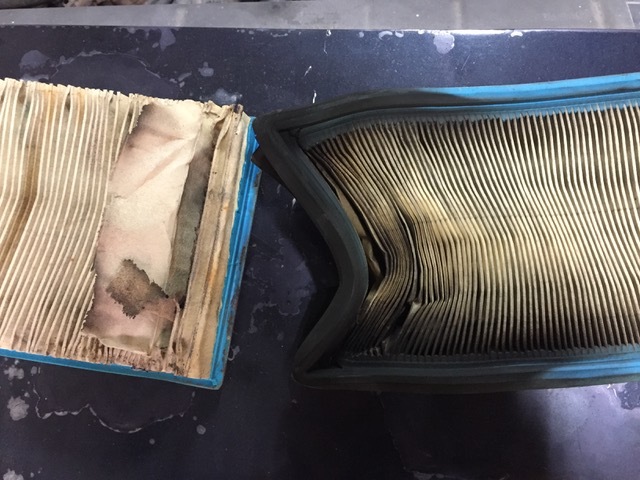 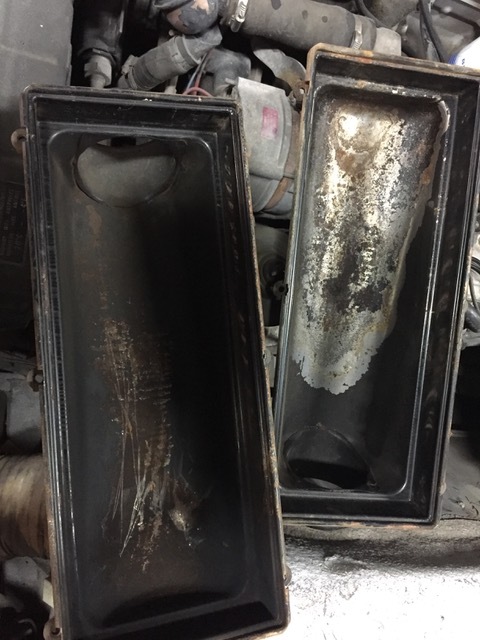 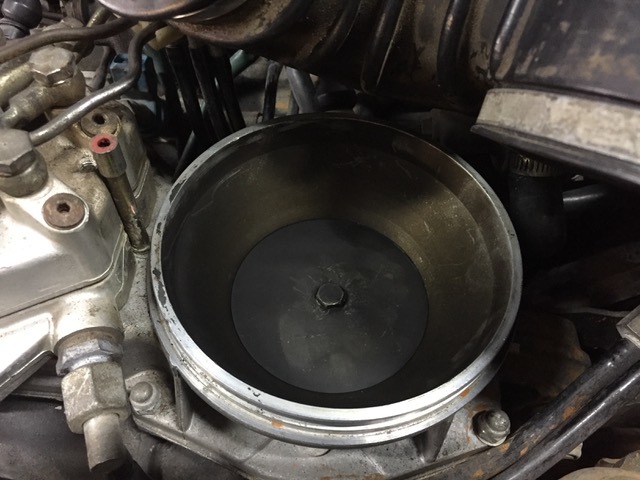 The big question is: why. Why did the inlet catch fire? The answer can be answered almost immediately. We have 12 cylinders. So there is always an inlet valve open. In addition, we are dealing with K-jetronic. This is a Constant Injection System. So fuel is always injected on all injectors. The pressure varies, causing the flow to increase or decrease. But there is always a good dose of fuel in the inlet. If a spark comes at a time when the inlet valve is still open ... The business catches fire. And that happened here.

But why ? It appears that this engine originally, just like the 308, had 2 ignition coils. However, this has been converted to a single ignition coil. The distributor is only designed and has a split rotor. So in fact they are 2 distributors in 1 unit, but in this case the rotor is connected. And if you look carefully, the connections of the distributor do not follow each other, but these always jump 180 degrees. So the first cylinder in the ignition sequence is easy. The next one is 180 degrees opposite. And the Porsche specialist had missed it. This simply connected everything in (the wrong) order and did not switch to the other side of the distributor. The engine was running. But it may be clear that this was not entirely the intention of Ferrari.

After cleaning everything, having fished the air filter remnants from the inlet and having put the spark plug cables neatly in place, the engine could be started after a compression test and a fluid check. This caught on quite quickly and ran nicely. It was noticeable that the K-jetronic was contaminated, but it was running like a V12. And that was the goal. 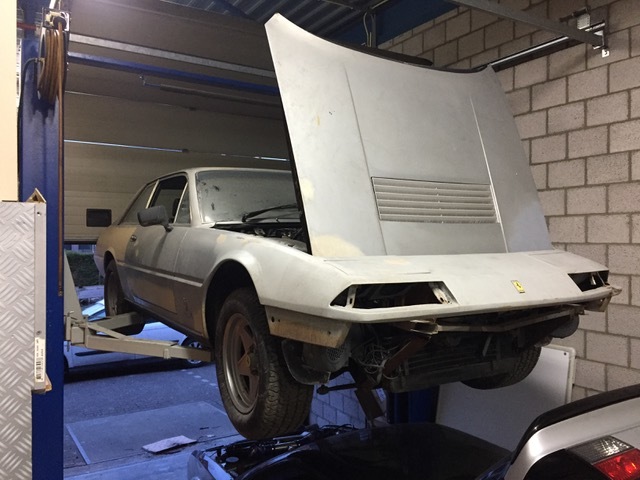 It will be known fairly quickly if you successfully complete such a project. Quite quickly after the first 400i project, there was another car at the door. A USA "barnfind". A transporter brings the car.

First check. Could it contain oil? Yes. Enough. About 3x too much. Almost 20 liters of oil go into this engine as standard. With what I see on the arrow, it should now contain about 60 liters. The big question is: is it oil? Given the odor and viscosity of the liquid, it is more of a gasoline-oil mix.

This is extremely dangerous. If you would start the engine with this, the engine will get virtually no lubrication. But apart from that, the gasoline will eventually evaporate sufficiently to form a flammable mixture in the crankcase. Then the engine bursts apart due to a carter explosion. So drain it. To be sure, we prepare 2 bins. And they are full. To the edge. More than 60 liters of fluid come out of the engine.

Now the question is: where does the gasoline come from? The K-jetronic system functions by means of an air weigher. A valve is pressed in by the air drawn in. This presses a plunger and as a result, the pressure of the system is increased and more fuel enters the engine.

Someone has preceded me and has tried to get the engine going. In the process, the valves of both airweighers are pressed in, so that the plungers are pressed into the chamber and the pressure of the system is increased. Due to the aging of the fuel, it has started to ferment and the plungers are stuck in the pressure regulator. In the full load position. The engine is therefore completely filled with gasoline.

We disassemble the K-jetronic pressure regulators. Fortunately, the plunger manages to get out without too much drama. It all still seems to be in reasonably good condition. Downtime and pollution has been the culprit here. But we are not there yet. If, due to the excess fuel, the engine above the piston has made a "liquid lock", connecting rods may also be crooked. So we go on a little further.

Now that the fuel problem has been solved we change the oil and filters with the cheapest stuff we can find. Because this oil will soon be flushed out again. Now we can disassemble the spark plugs to measure the compression. And we come across some "specialist work" again. 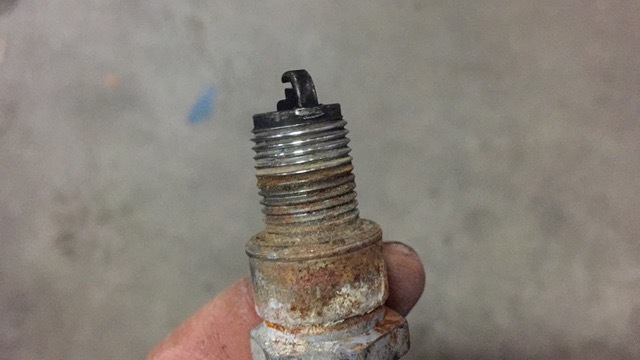 The thread has been corroded for unknown reason and my predecessor has not been able to fully assemble the spark plug. This got stuck prematurely and has apparently been around for a while. We carefully tap the thread clean and assemble new spark plugs after the compression measurement, which luckily was fine. The new spark plugs can be installed properly again.

Then we arrive at the overall state of the fuel system. All vaccumlines have been digested and we are replacing. A nice job in such a crowded engine room. 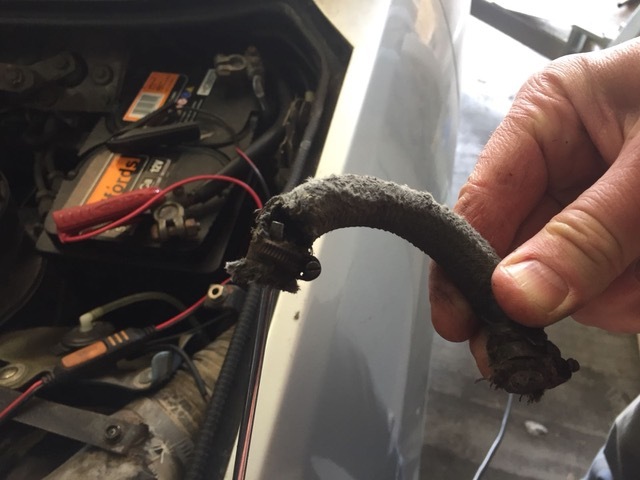 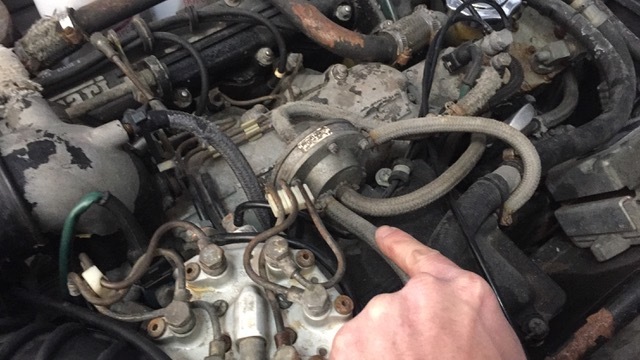 After the repairs on all hoses, the engine can be started after the necessary checks (oil pressure! Spark plug cables!). This catches on. But the engine does not run on all cylinders. It is fairly easy to determine which cylinders do not turn. From under the fender we see all the exhaust pipes running a reasonable length apart. We aim the infrared temperature meter on it and immediately see that 9 of the 12 cylinders are working. But at least 3 moderate to do nothing. Those exhaust pipes stay cold. We continue to puzzle. Spark is not the problem. The spark plugs remain dry and just as new as the package. The refusing cylinders receive no fuel. We disassemble the injectors which luckily goes fairly easily with this engine. We exert them on the tester. And then the problem immediately becomes clear. But actually visual inspection was enough. 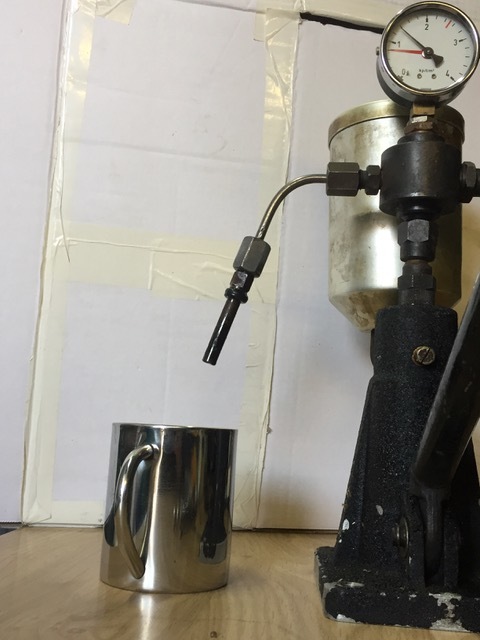 It is scientifically correct. Test the injectors in this way. But visual inspection was probably enough. 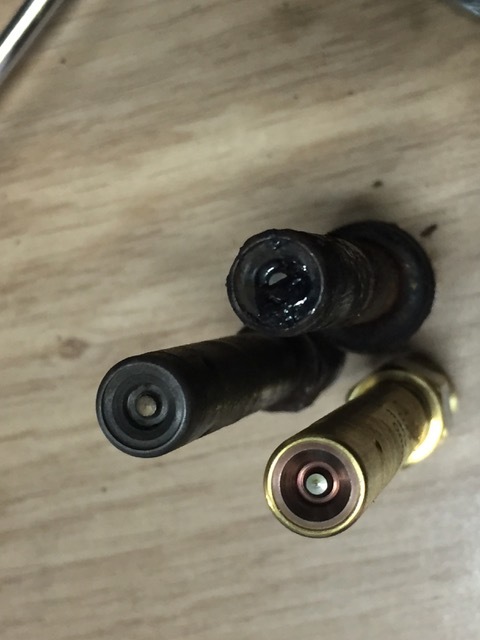 It is obvious. The working injector is black, but not affected. The defective injector has been damaged and has residual dried-on gasoline. The new injector is ready to be mounted.

A new starting attempt results in an engine running on 12 cylinders. I would have preferred to have replaced all 12 injectors, but that was not done in consultation with the customer. Everything done ? No. With a cold start attempt the next morning, the engine barely starts. A fuel problem, the spark is good. We decide to check the control pressures of the warm-up regulators. 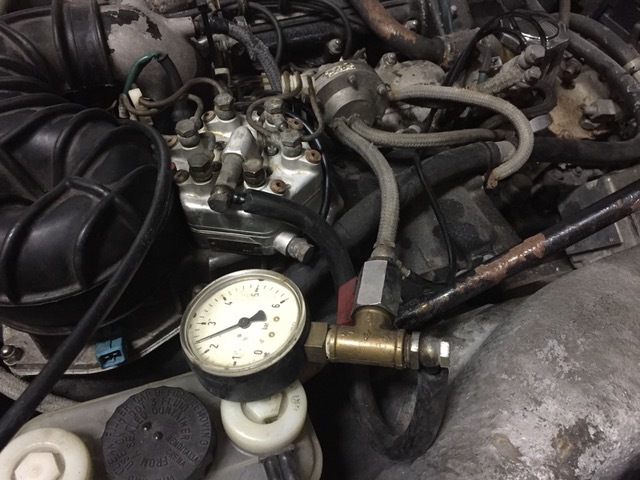 However, the problem presents itself rather quickly. The fuel runs out from under the car. One of the two pressure accumulators failed. The accumulator normally maintains residual pressure on the fuel system to prevent evaporation in the control units. There is a pipe on the back of the accumulator and the fuel leaks out. The membrane is leaky. In combination with the injectors that are not 100% sealed, this means that the system will be pressurized fairly quickly after stopping. The temperature of the engine ensures that all liquid fuel is converted into vapor. And before it is replaced by liquid again, the engine does not get enough fuel to start. After the leaking accumulators have been replaced, the starting problem is more or less solved. the leaking injectors ensure that the engine does not immediately start on 12 cylinders, but the result is acceptable and after one minute the engine runs stably on 12 cylinders.

These are the odd jobs that make the work even more interesting. My hands, however, itch these engines completely to build on the EFIgnition ECU. This works easier, more reliably and the engine would get a lot better.